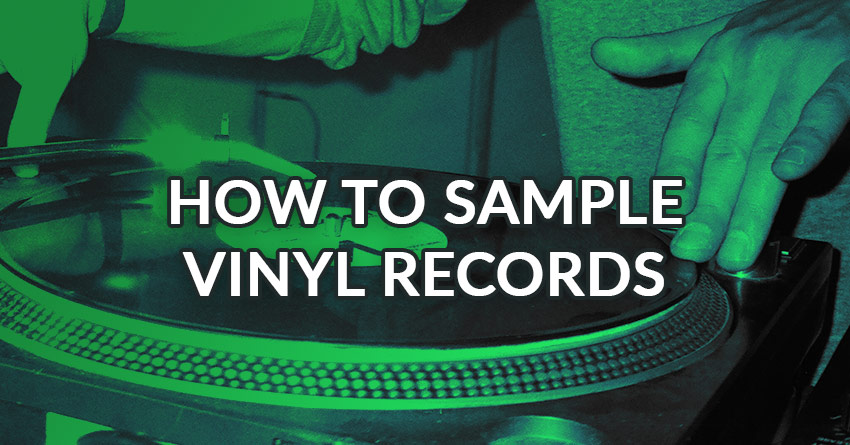 Sampling is a technique used for decades and since the 80’s very popular with the release of the first Akai MPC. Today it’s mainly used to create Hip Hop and you can sample tracks in your DAW without any external equipment. However, sampling digital tracks just isn’t the same as sampling vinyl. Not only does vinyl sound different, the whole process for the producer is different and will challenge you in ways your DAW or mp3 sample simply would not. Therefore sampling vinyl records is still very popular and will give you that old school Lo-Fi vibes many producers are looking for. This tutorial will show you how to sample vinyl in FL Studio 20.

So what equipment do you really need for sampling vinyl? There are multiple answers possible and mainly depend on what you’ve access to already. Since you don’t want to buy a lot of hardware when you’re about to explore the world of sampling for the first time.

This is the equipment you need for sampling vinyl in FL Studio:

When you don’t know if your record player / turntable has an build-in pre-amp, here are a couple things you can do:

Sampling vinyl with a record player with build-in pre-amp

This is the most simple way to sample vinyl. Make sure the turntable is set to “line”. Because the “line” signal coming out of your record player is ready for your PC or DAW. Therefore you can simply hook up the analog stereo RCA cables (red and white) to your soundcard’s line in ports. You probably need 2 RCA Female to Jack Male adapters.

When I started sampling I bought an Numark TT-USB and hooked it up with 2 Female RCA to Male Jack cables directly on my M-Audio M-Track.

The quality of low budget record players isn’t that good, same goes for low budget (pre-)amplifiers. Upgrading these will definitely improve the sound quality. But for sampling to create Hip Hop or Lo-Fi instrumentals it will not make a lot of difference, you will probably edit the samples anyway. I now have a Pioneer PLX-500 for a couple of months and it fits my needs perfectly.

Sampling Vinyl with an old record player without build-in pre-amp.

I have also used a older turntable in the past, the Technics SL-D202 and this one doesn’t have a build-in pre-amp. So it only outputs a “phono” signal and when I hook this up directly to my soundcard the volume will be very low and there will be a lot of noise. This is where the external pre-amp or mixer with pre-amp comes in, it boosts the signal before it goes to the soundcard.

So the RCA from the record player goes into the pre-amp (I used the DAP PRE 101 back then, very simple but effective). From there I sent the the signal through an RCA to Jack cable to the line inputs of my soundcard (M-Audio M-Track).

Now that you’ve setup your turnplayer, you are ready to sample vinyl records into FL Studio 20. I recommend to use Edison, to do this, simply open up Edison on one of your mixer tracks. At the top right of your mixer select the input of your soundcard where the turntable, pre-amp or mixer is connected, see the image below. Now when you hit record in Edison it will get everything you hear from the record player. So also the needle drops, vinyl static and scratches.

It is of course also possible to record directly in the song view of FL Studio or any other DAW (e.g. Ableton or Logic) for that matter. Personally I use my Maschine to record en chop up samples most of the time. After chopping them, I import the samples in FL Studio as wav files or I open Maschine as a vst inside FL Studio.

If you have any questions or comments regarding sampling vinyl records in to FL Studio (or any other DAW) please feel free to write a comment or check the F.A.Q. below.

FAQ – Recording Vinyl to a DAW

Does my record player has a build in pre-amp?
As stated in the article:

Do I need a mixer to record vinyl in to FL Studio?
Not when your turntable has a build-in pre-amp, or when you have an external one. But if you want to record scratching samples, I highly recommend a mixer with crossfader.

Can I use an old or normal amplifier instead of a pre-amp?
Probably. Most stereo amplifiers have a “phono” input. This is for your record player.

Can I record scratching in FL Studio, Ableton or any other DAW?
Yes with above set-up that’s possible. But make sure your turntable is capable of scratching and a dj mixer (with crossfader) is recommended.